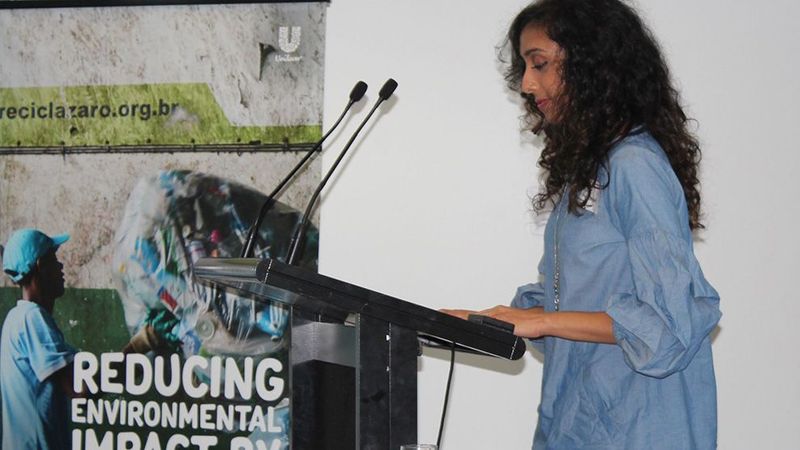 Unilever Australia has unveiled its seventh year of global and local progress towards its Sustainable Living Plan (USLP) targets, revealing a fourth consecutive year of growth globally for its ‘sustainable living’ brands, which grew 46% faster than the rest of the business and delivered 70% of the company’s turnover growth.

Unilever hosted 150 leaders across the business, NGO, academic and government sectors for a discussion on the importance of business leading for trust and how better cross-sector collaboration can drive more progress towards the UN’s Sustainable Development Goals (SDGs) in Australia.1

Launched in 2010 the USLP set ambitious targets to decouple Unilever’s growth from its environmental impact, while increasing the company’s positive social impact. Today, Unilever is on track to meet around 80% of its commitments, which include improving health and wellbeing for 1 billion people, reducing environmental impact by half and enhancing livelihoods for millions.

Unilever reported it is on track in Australia to meet key commitments including:

Unilever Australia and New Zealand CEO, Clive Stiff said: “We have made good progress against our ambitious targets in Australia and globally, and the continued strong growth of our sustainable living brands tells us the USLP is making a difference, and that consumers are increasingly aware of the impact the products they are purchasing have on the environment.”

“We also want to be transparent about how much more work there is still to do. This is critical when we are witnessing a crisis of trust in institutions in Australia and across the world. We believe business must play a leading role in restoring trust, and that at the heart of trust lies transparency.”

“We also know that the biggest challenges facing our nation and our world can’t be addressed on our own. There is an ever-increasing need for us to work in partnership to drive transformational change across our value chain. To do so will require a new level of transparency across the board and business must be part of the solution.”

The future of sustainable business

Unilever is already looking beyond its current USLP targets by carrying out its largest ever listening exercise on the future of sustainable business. Over 40,000 employees and 250 stakeholders responded to the ‘Have Your Say’ project, setting out their views on the priorities they would like Unilever to focus on after 2020, and what future success would look like.

In Australia, the top three priorities were revealed to be zero food and packaging waste, access to water and climate change.

As well as providing a progress update on the USLP, Unilever also launched its Young Entrepreneur Awards.

The awards recognise and support brilliant young innovators tackling the planet’s biggest environmental and social challenges, and help them achieve scale for impact. Since the launch of the Awards in 2013, they have reached over 3,500 inspiring young sustainability entrepreneurs and provided tailored support and funding to 29 winners.

Mr Stiff added that by taking a multi-stakeholder approach, Unilever is able to leverage its scale and resources as a business to address societal and environmental issues while delivering economic value.

“We believe that it is not possible to achieve long-term business success in a world with poverty, hunger and climate change. We have long recognised that the only acceptable business model for Unilever is one in which the planet and society thrive,” Mr Stiff said.

More detail on the progress of the Unilever Sustainable Living Plan can be found at: Latest Progress in Australia and New Zealand

In Australia and New Zealand:

Unilever is one of the world’s leading suppliers of Foods & Refreshment, Home and Personal Care products with sales in over 190 countries and reaching 2.5 billion consumers a day. It has 161,000 employees and generated sales of €53.7 billion in 2017. Unilever employs more than 1,300 people locally, and has offices and manufacturing facilities in Australia and New Zealand.

The USLP creates value by driving growth and trust, eliminating costs and reducing risks. The company’s sustainable living brands are growing 46% faster than the rest of the business and delivered 70% of the company’s growth in 2017.

Unilever was ranked number one in its sector in the 2017 Dow Jones Sustainability Index. In the FTSE4Good Index, it achieved the highest environmental score of 5. It led the list of Global Corporate Sustainability Leaders in the 2017 GlobeScan/SustainAbility annual survey for the seventh year running. Unilever has pledged to become carbon positive in its operations by 2030.

Unilever has been named in LinkedIn’s Top 3 most sought-after employers across all sectors and named Graduate Employer of Choice in Australia.

1The UN SDGs comprise of 17 goals with 169 sub-targets aimed at ending poverty, protecting the planet, and ensuring prosperity for all.